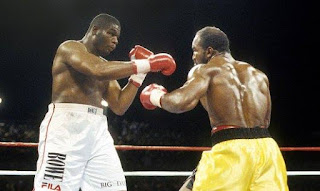 I remember the Bowe-Holyfield Trilogy of the early and mid 1990s very well, because I got to see all three fights. I was a Junior in High School during the first fight in 1992, saw it on pay per view after I begged my dad to order the fight and we ended up watching at least part of it together. I've always had a lot of respect for Evander Holyfield, he's the ultimate of professionalism when it comes to not only Pro Boxing but Pro Sports as well, no other boxer has ever worked harder or. Had more dedication to his craft which generally speaking helped him a lot but it also hurt him.

Evander, ended up fighting too long and losing to guys and getting beat up by guys, that 5-10 years earlier he would've beaten fairly easily. And hopefully he hasn't paid a long term price for that when it comes to his health, we'll see later. But one problem I had with Evander, is that he seemed to have it a little too easy, he hadn't gotten much of a big challenge in the Heavyweight Division to this point. George Foreman gave him a pretty good fight in 1991 but Evander won most of those rounds and I wanted to see someone who not only gave Evander a big test but could actually beat him and thats where Riddick Bowe came in.

Evander Holyfield wins the World Heavyweight Championship in 1990 by beating an overweight and overconfident James Douglas. Who probably thought way too much of himself after whipping and knocking out Mike Tyson for the Heavyweight Championship in January, 1990 in Japan. And before Evander fought Riddick Bowe, he defended his title successfully twice against two boxers who were once. Great but at this point of their careers were in the early forties, in George Forman and Larry Holmes. The super fight in the Heavyweight Division of the 1990s, was suppose to be Evander vs Mike Tyson.

But of course with Iron Mike's rape case, that wasn't going to happen. Again this is where Riddick Bowe comes in, after coming off the 1988 Olympics where he didn't do as well as perhaps he should've, he was looking for a big challenge. And a chance to prove himself and why not fight for the World Heavyweight Championship and win it to accomplish it. The Bowe-Holyfield Trilogy was great because you have two great heavyweights at the prime of their careers. Probably the best two heavyweights of the 1990s, who both had a lot of respect for each other, who both knew that they had to be their best to beat the best, who was their opponent. Thats how they both saw these fights and why these fights worked out the way they did, two great fighters both bringing their A Games to these fights.

Posted by Ederik Schneider at 6:09 PM