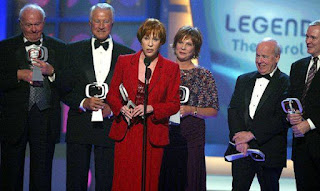 One of the best variety comedy shows of all-time, sort of like a half-hour Saturday Night Live. Speaking of SNL, SNL gets a lot of credit for being such an original variety skit-comedy show that other shows have tried to follow and make their own versions of it. And all of that is true, but Carol Burnett, was essentially the same thing, but came out 6-7 years earlier in the late 1960s, instead of 1975 with SNL and was on CBS instead of NBC. And you could make a case that Carol Burnett herself and her show with his her great cast and writers, inspired shows like Saturday Night Live and later In Living Color, MADD-TV and other skit comedy shows. Because of how good it was, how original it was, the topics it covered. That it wasn't about sending a political, or cultural message, but about making fun of everyday American life.

The Carol Burnett Show, covered and had everything and they weren't about politics at least in the sense they were trying to push some political message. It was simply about entertainment and what was going on in America at the time especially as it related to pop culture. And always looking for the funny side of everything they covered. They mad fun of politicians, movies, TV shows, actors, musicians, weren't worried about political correctness and pleasing everybody. But great comedians who all had similar sense of humors, great chemistry, who liked each other loved working with each other. And in that sense at least it reminds me of Seinfeld and was better than Saturday Night Live, that generally looks at politics from a political slant. Carol Burnett, was simply about making people laugh and doing it in a classy way and having a great time at it.

Posted by Derik Schneider at 8:58 PM