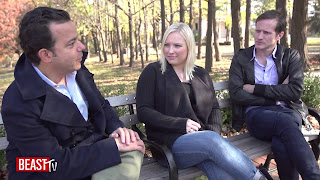 Sounds like a real reality TV show in the works, perhaps Megan McCain will produce it. You heard that here first. As far as David Petraeus and his sex scandal, I guess this is the clincher that American politics and government is never boring and why we have a political junky industry. And for Progressives I guess who believe that America should be more like France, well we are when it comes to our public officials and how they live their personal lives. Political junky, is no longer just a hobby for unemployed politicians who can't seem to win another public office and keep losing. And spend all of their free time, which is really all of their time, especially if they have a Congressional pension, watching C-SPAN, CNN, MSNBC and FNC. But a way for writers and pundits to make their living. To tell Americans how much they don't know about American politics and government.

As far as Benghazi, if it wasn't for that story, what would House Republicans do? At least some of them like Speaker John Boehner, are smart enough to know they can't repeal ObamaCare in this Congress with a Democratic Senate and Democratic President, that the law is named after. Most of them probably never have any attention of leaving Congress, at least the House of Representatives. So they don't want to work with Senate Democrats to pass anything constructive that President Obama might actually sign. And risk being primaried and having to go home and work for a living. Like washing cars, or hosting radio talk shows, teaching gym in high school, or whatever they were doing in 2009 before they decided to run for the House. So all they have left in their one page playbook that a five-year could read is a bogus (to be too nice) Benghazi investigation.

Posted by Derik Schneider at 11:22 PM No comments:

Raquel Welch, really is a true goddess. A woman now in her early seventies is still this hot, cute and sexy. Who is also a hell of an actress and entertainer in general, who is not just about her hot sexy looks. But had made a great career with her looks, but ability to act and entertain as well. She’s someone who was born with goddess looks and features, which probably got her in the door in Hollywood and got her a lot of work early on.

But I sort of her look at her like I look at a great talented athlete who gets noticed real quickly, but then takes full-advantage of that and make a great career for them self. Raquel, is a very good actress whose used her physical talents, lets say to get herself parts and work, because directors want to work with her and use her. Because they know she’ll sell their movies and projects. But then does a great job in the roles that she gets. Because guys simply want to see her, but then they also can see that she can act, sing and make people laugh as well.

Raquel Welch, has truly made a great life and career for herself as a Hollywood goddess. Showing women of all sorts of backgrounds that if they work hard and take care of themselves and are responsible, they to can make a great career and life for themselves. Perhaps not age as gracefully as Raquel, but age well and not have to look like a senior citizen even if they already are one in years. The old cliche, “age is only a number”, could have been written for Raquel.

She’s not someone who was discovered in her twenties, but then burned out in her thirties, or dead in her thirties. She’s someone if anything is doing better now in her seventies than she did in her thirties. In some ways perhaps even sexier with great curves now. A woman at her age whose still a sexy baby, a hot baby-faced adorable woman, in her seventies. Who can probably make women young enough to be her granddaughter jealous. Only a goddess, or some made up Hollywood figure could still have that at this point in their life. But Raquel is the real thing who fully taken advantage of all of her abilities.
Late Late Show With Craig Ferguson: Raquel Welch in 2010

Posted by Erik Schneider at 3:54 PM No comments:

Email ThisBlogThis!Share to TwitterShare to FacebookShare to Pinterest
Labels: Raquel

Liberty Pen: PC Is Never Having To Say You're Sorry

Liberty Pen: PC Is Never Having To Say You're Sorry

Political correctness, at its best (not exactly a high point) is a feeling in the country that bigotry should be wrong and looked down upon. Not outlawed, but considered unacceptable to the majority of the country. That I and I believe a consensus of Americans believe in. Political correctness, at its worse, (which is as high as Mount Everest) is this feeling that we should not only say things that may offend people that Progressives support, but that we shouldn't be allowed to say that and there should be legal or civil sanctions that should come down upon people who offend people that Progressives support. "But if you say offensive things about people that Progressives oppose, like right-wingers, well thats just free speech. And what's the problem, because all they are saying is the truth." So its not just political correctness that can be a problem, but a double standard that can come with political correctness that can also be a problem as well.

To put it bluntly, Freedom of Speech protects the assholes as much as the enlightened. Especially when the enlightened says things about people that Progressives (and I'm being nice with the word Progressives) believe deserve special protection and are part of some vulnerable class of people that government should give special treatment to. There's nothing bigoted about the truth and I would argue nothing offensive either. The Christian-Right and Muslim-Right have one big nasty thing in common. They tend to see women and homosexuals as second-class citizens. In the women's case, people who are only on Earth to serve their men and raise their kids. In the homosexual case, people who should be in mental institutions, if not jails and in the Islamist case, people who don't even deserve to live. You can still be put to death in some parts of the Middle East simply for being gay.

So when a Liberal or Conservative or Libertarian, says that the Christian-Right and Islamists view women and gays as second-class citizens, who are they offending and where is the bigotry? If you just say that about Christian-Conservatives, you'll be viewed as a hero with the New-Left in America. And as someone with the guts to speak the truth. But if you say the same thing about Islamists, even though all you're doing is speaking the truth, you'll be viewed as a bigot. The politically correct thing should always be the truth. And if someone is wrong, or ignorant, or even hateful, they'll be held accountable by everyone else. They won't be forced to shut up and government wont' take their platform away from them. But public opinion will sanction them and the asshole will lose supporters and perhaps their job. But they won't be thrown in jail simply for speaking their mind. That is not how a liberal free society works.

Posted by Ederik Schneider at 8:37 PM No comments: