Reason: Matt Welch: Is Free Speech Under Attack in America? 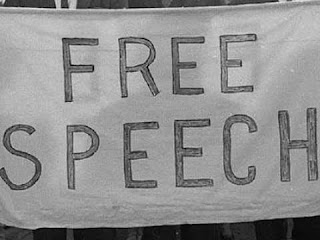 If there is one place in the world where you want people to be free to think for themselves and learn new things and hear new ideas and be able to learn and develop their own views on the issues, it would be college and I would add high school to that. For democracy, especially liberal democracy to mean anything people have to be free to speak and think for themselves. Instead of creating some collectivist board of so-called experts who are only experts in name only and perhaps in actuality only being experts on the nonsense that they believe in. Telling the peasants the people they rule over what speech is appropriate and what isn't. Rewarding people for speech that they agree with and punishing even through governmental force when people say things that offends the so-called experts.

We don't have a liberal democracy without Freedom of Speech. And Free Speech is exactly that. Not the right to be nice, or be mean , or be correct, or lie, but the right to speak freely. To express yourself and even say things that someone might view as offensive. Even if they have such a big foot stuck up their ass tight ass that they can't even handle criticism that is correct. Imagine if you were doctor, who wasn't allowed to give your patients bad news. So you end up telling your obese patients that they don't need to exercise and cut down on their 5-6 meals a day and not have to eat stuff other than fast food, because not all obese people suffer heart attacks and develop diabetes and all of the other diseases that are related to obesity. That doctor would end up being useless, because they wouldn't be able to treat any of their unhealthy patients, because they would never be allowed to give bad news. For fear of hurting their patients self-esteem.

That is what political correctness is. It is not only a form of fascism, leftist fascism when it comes from the Left and a form of Marxism. But it is an attempt to hide people from negative truths for fear of hurting and oversensitive person's self-esteem.

"We can't call Joe fat, because that might not only offend Joe, but fat people in general. And fat is used to put down fat people. And even though I'm Joe's doctor and I've seen men like him die from heart attacks and from diabetes, because they didn't even know what exercise was and didn't eat properly. I'm not going to tell Joe that he's overweight and too fat. Because I'm more interested in his self-esteem than his physical health."

That is what practicing medicine would become like if doctors weren't allowed to tell their patients the truth. And that is just one example of the dangers of political correctness in America. Free Speech, is not the right to not be offended, but to express yourself and hear what others have to say as well.


Posted by Ederik Schneider at 6:28 PM