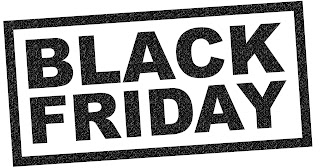 Black Friday, the official start of the Christmas shopping season in America and as someone who has some experience working in retail I know how crazy it can be. It is that one day of the year where Americans can go crazy and not look crazy, because they must have whatever the current OMG product is out there. Generally having something to do with new technology. And if they don’t get that product, they’ll look like so old school, or 2014 or whatever the year is compared with people who already have that new smart phone, iPad, or whatever the hell it is. It is that one day of the year that people find great deals on stuff that they don’t need and buy it. To wake up the next day to figure out they don’t want or need whatever the thing is that they just found a great deal on. And besides, what they just bought is already old school compared with whatever the latest thing is.

It is that day of the year where people can camp out the night before so they’re in at Best Buy, Macy’s, or whatever the store is, the second it opens and be able to buy whatever they think they’re looking for at that second, to find out they don’t want it, or need it when they get home. Or perhaps its a present and they think to them self, “why would this person want this.” Black Friday, is 21st Century pop and valley culture gone wild, where everyone has that one day to be more like whatever their favorite current celebrity is until they find a new one the next day. Despite all the stupidity that comes from Black Friday with all the faddism that comes from it, as someone smart once said and I’m paraphrasing, but that idiots are useful. Black Friday, puts money in people’s wallets, saves people money if they spend their money wisely on stuff they can actually use and need and it also creates a lot of jobs. Things that we still need a lot of as a country.

For Social Justice Warriors, (speaking of useful idiots) Black Friday is not a racist holiday. It is not some racial slur at African-Americans and anyone else of African descent. It is also not some day that promotes economic greed and the weakness’ of private enterprise, capitalism and corporate greed. It is a great use to the American economy, because it creates jobs and keeps business’s successful. It puts money in average Americans wallets and saves money for a lot of Americans who spend the day wisely. Yes, private business’s end up doing very well on this day, but that’s called private enterprise and capitalism. And workers and consumers don’t do well when business’s don’t do well. These things go together. And someone not a fan of this system should explain what they would do differently. Perhaps try to find some state-run business that has real competition that does well on Black Friday. Or Rainbow Friday, or whatever the politically correct term would be for it.