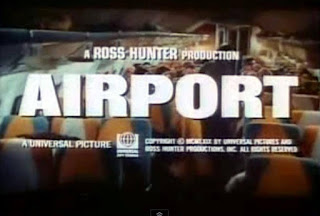 The 1970s, was a crazy and very entertaining even with how gloomy and depressing a decade that it was. With the bad economy, Vietnam War, high crime rate and everything else. But one of few great things about that decade was the entertainment. Especially movies and TV. Terrorism was on the mind of millions of Americans, as well as what could happen if something went wrong with an airplane when it was in air and thousands of miles from a nearest airport. Soap operas were also very popular and common in the decade, as well as movies that combined several different genres and stories in one movie. Airport, isn’t a pure action movie, or action/thriller, or action/drama, or action/comedy, or soap opera. It was all of those things into one movie. With a great cast and a great director.

Airport, is essentially about what good decent intelligent people, who all have their own issues and problems outside of work, do when they’re all under extreme pressure. Like having a passenger on the plane who is so desperate, who is out-of-work and can’t hold onto a job, who needs money and believes there is nothing left he can do, but have himself killed so his wife can collect his life insurance. Van Heflin, plays a man named Guerro who manages to get a bomb on the plane. The General Manager (played by Burt Lancaster) of the airport, is no longer in love with his wife and as a result is now a workaholic who doesn’t want to go home at night, because he’s happier working all the time. Jacqueline Bisset, plays a head stewardess who is having an affair with a married pilot and is now pregnant with his baby. Dean Martin, plays the father of the head stewardess’s baby and his married and having an affair with that stewardess.

You have all of these decent intelligent people who are all very good at their jobs, but are all under enormous pressure and are all now dealing with an airplane that has a bomb on board by a man who is suicidal and wants to set the bomb off and the bomb does go. Off so you have all of these people who are already under enormous pressure now having to deal with a potential airplane disaster in horrible Upper Midwest weather in the winter, leaving from Chicago. And now also have to deal with the possibility of hundreds of people dying in a horrible plane crash. This is a very entertaining and very funny movie. Perhaps not so believable with all the side soap operas in it. But even great soap operas tend not to be very believable. And it is very entertaining and pretty funny movie with very funny people in it and a an all-star cast.

Posted by Rik Schneider at 5:32 PM